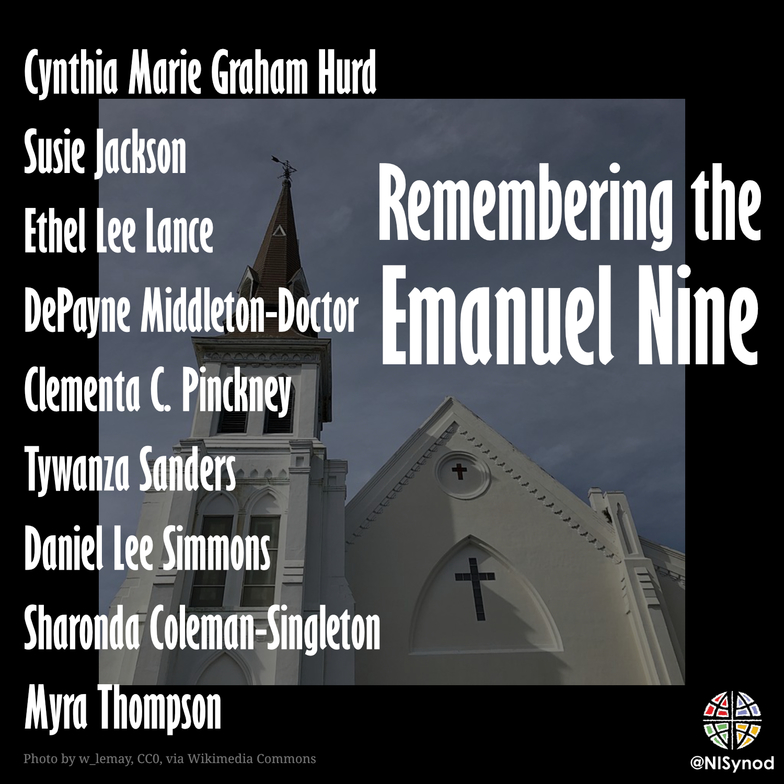 Pastors Pinckney and Simmons were both graduates of the Lutheran Theological Southern Seminary.

A resolution to commemorate June 17 as a day of repentance for the martyrdom of the Emanuel Nine was adopted by the Churchwide Assembly of the Evangelical Lutheran Church in America on August 8, 2019.

Congregations of the ELCA are encouraged reaffirm their commitment to repenting of the sins of racism and white supremacy which continue to plague this church, to venerate the martyrdom of the Emanuel Nine, and to mark this day of penitence with study and prayer.

As part of the 2019 ELCA Churchwide Assembly, voting members adopted a resolution designating June 17 as a commemoration of the martyrdom of the Emanuel 9—the nine people shot and killed on June 17, 2015, during a Bible study at Emanuel African Methodist Episcopal Church in Charleston, S.C.

The resources referenced below are provided to help synods and congregations mark this commemoration. These resources can be adapted for virtual worship, online conversation, or individual reflection and devotion. You are invited to use them in whatever ways are most helpful for your local context.

Our relationship to the shooter, as well as two of the slain, reminds us of both our complicity and our calling. Together we confess that we are in bondage to the sins of racism and white supremacy and, at the same time, we rejoice in the freedom that is ours in Christ Jesus who “has broken down the dividing wall, that is, the hostility between us” (Ephesians 2:14).

May God continue to guide us as we seek repentance and renewal, and racial justice and reconciliation among God’s precious children.

On June 17, 2020, the ELCA offered an online Prayer Service for Commemoration of the Emanuel Nine. This marked the fifth anniversary of the evening nine people were shot and killed during a Bible study at Emanuel African Methodist Episcopal Church in Charleston, S.C. and the first official commemoration following the 2019 Churchwide Assembly.

As church we are called to confess the sin of racism, condemn the ideology of white supremacy, and strive for racial justice and peace. Beyond statements and prayers, we are called to also act and respond to injustices. Take the ELCA Anti-Racism Pledge.

For many decades, the Evangelical Lutheran Church in America and the African Methodist Episcopal Church have been ecumenical partners through coalitions such as the National Council of the Churches of Christ in the USA (NCC). In the 1990s, our two churches entered into theological dialogue seeking full communion and co-published a congregational resource. Our churches have also engaged in various forms of cooperation and public witness together and with other ecumenical partners. We have participated together in the cross-racial dialogue of the Conference of National Black Churches since 2015 and in the NCC’s A.C.T. Now to End Racism initiative since 2018. As the Office of the Presiding Bishop tends to church-to-church relations nationally, vital relations have been cultivated across the church by bishops, rostered ministers and lay leaders, with key leadership from Lutherans of African descent. We continue to seek ways to deepen and expand our ecumenical partnership across various ministry contexts and communities as part of our ecumenical commitments and churchwide resolutions.
Learn More.